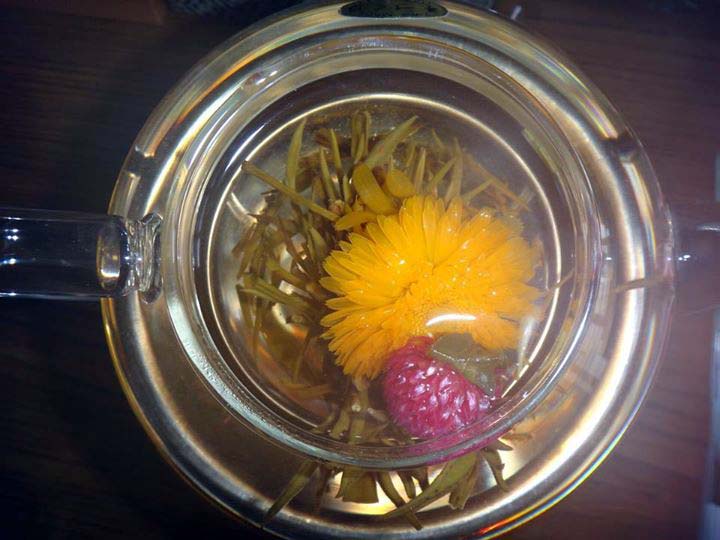 Chinese tea may be classified into five categories according to the different methods by which it is processed.

Green tea is the variety which keeps the original colour of the tea leaves without fermentation during processing. This category consists mainly of Longjing tea of Zhejiang Province, Maofeng of Huangshan Mountain in Anhui Province and Biluochun produced in Jiangsu.

Black tea also known as red tea (hong cha) in China, is the category which is fermented before baking. It is a later variety developed on the basis of green tea. The best brands of black tea are Qihong of Anhui, Dianhong of Yunnan, Suhong of Jiangsu, Chuanhong of Sichuan and Huhong of Hunan.

Oolong tea: This represents a variety half way between the green and the black teas, being made after partial fermentation. It is a specialty from the provinces on China's southeast coast: Fujian, Guangdong and in Taiwan.

Compressed tea: This is the kind of tea which is compressed and hardened into a certain shape. It is good for transport and storage and is mainly supplied to the ethnic minorities living in the border areas of the country. As compressed tea is black in colour in its commercial form, so it is also known in China as "black tea". Most of the compressed tea is in the form of bricks; it is, therefore, generally called brick tea, although it is sometimes also in the form of cakes and bowls. It is mainly produced in Hubei, Hunan, Sichuan and Yunnan provinces.

Scented tea: This kind of tea is made by mixing fragrant flowers in the tea leaves in the course of processing. The flowers commonly used for this purpose are jasmine and magnolia. Jasmine tea is a well-known favorite with the northerners of China and with many outside of China.